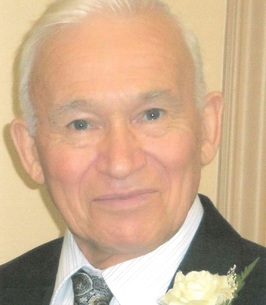 Leonard was born in De Valom, a small town in Friesland, the Netherlands, the 7th of 12 children of Biense (Ben) and Baukje (Barbara) Wolters. The family emigrated to Canada in the spring of 1950, to Lethbridge, Alberta. The family worked on a farm and then rented a farm. A move was made to Duncan, BC in 1956 to begin farming on their, newly purchased, dairy farm. Leonard, again, met a young lady, Agnes Jansma, who had caught his eye earlier, but who had gone to the Netherlands to become an RN. They courted for a year and married on November 13, 1965.
Brent (1967) and Bonnie (1969) joined the family and later on their grandchildren Zachariah, Mishael and Allyssah also became their treasured possessions.
In April 1966 Leonard and Agnes took over the family dairy farm, where they farmed for almost 40 years. Serving the Lord was of primary importance in Leonard’s life. He served many terms as Elder in the First CRC of Duncan, BC. The Duncan Christian School was also close to his heart.
As of May 1, 2007, Leonard and Agnes made their home in Dunnville, On. Here, with joy, they became members of the Grace Reformed Church. Many trips were also made with their 5th wheel, or going on cruises. Many blessings were enjoyed this way.
Sickness was also part of life, especially when Leonard was diagnosed with heart disease, kidney disease and later on cancer, but the Lord saw Leonard through all of these difficulties for many years. The doctors and specialists were gifts from God who, medically, looked after Leonard’s care in a wonderful and caring way. He was able to get a donated kidney which extended his life by 12 years. Such a wonderful extra gift.
We thank God for the life of Leonard Wolters, a wonderful, faithful, caring son, brother, brother-in-law, husband, father, grandfather and friend, and a man who, above all, loved the Lord.
Leonard’s life motto was, “Trust in the Lord with all your heart, and lean not on your own understanding; in all your ways acknowledge Him, and He shall direct your path.” Proverbs 3 : 5, 6.
Friends may call at BALLARD MINOR FUNERAL HOME, 315 Broad Street East, Dunnville on Tuesday, March 15, 2022 from 2-4 and 6-8 pm. (Masks are required when on funeral home property at all times, no exceptions.). Following a private interment service, the funeral service will be held at Grace Reformed Church, 514 George Street Dunnville on Thursday March 17, 2022 at 1pm. In memory of Leonard, donations to Niagara Christian Gleaners would be appreciated by the family. Friends are invited to send condolences and sign the Book of Memories at www.ballardminorfh.ca.

All rights reserved. This obituary is also archived at obittree.com