To share your memory on the wall of Harm Kelly, sign in using one of the following options:

Print
KELLY, Harm
August 21 1929 - March 31 2020 At Haldimand War Memorial Hospital, Dunnville, quietly and peacefully in the Lord’s time, Harm was called home to be with his Lord. Our beloved Father, Grandfather and Great Grandfather Harm Kelly wa... Read More
KELLY, Harm
August 21 1929 - March 31 2020 At Haldimand War Memorial Hospital, Dunnville, quietly and peacefully in the Lord’s time, Harm was called home to be with his Lord. Our beloved Father, Grandfather and Great Grandfather Harm Kelly was in his 91st year. He was a faithful and devoted husband to his loving wife †Aaltje (Ali), nee Zantingh for 56 years who is already in the arms of Jesus (†February 2 2009). Harm was the father of Ina and Harry Bethlehem and their children: Sheri and Arjan Vos, Harold and Jennifer Bethlehem (Brianna and Jonathan, Collin, Jayden, Kaleigh, Josiah and Zachary), Rachel and Mark denBak (Cole, and Curtis), Ed and Melanie Bethlehem (Daniel, Aliyah, Ethan and Ava) and Emily and Peter VanderVelde (Mckenzie, Jenna, Jackson and Lacy); Clara and Gary Wielink and their children: Micheal and Nataschia Wielink, Cornelius (Krysten), Shaniah, Darian and Chloe; Elly and Jerry Evers (Henry and Maria Wielink) and their children: Keith and Suzanne Wielink (Alanna and Simon Folkerts, Taylor (Nick), Lucas and Tristan, Alicia and Murray Ravensbergen (Michael and Nathan), Faye and Ken Struyk (Kayla, Leigha and Noah), Hank and Heather Wielink (Lane, Neve, Chelsea, Dean and Vaughn) and Sarah and Ryan Smit (Brynlea, Logan, Landyn, Avery, Ashlyn); Ed and Alice Kelly and their children: Harm and Annette Kelly (Joshua, †Michael, Hannah, Caleb), Edward and Maria Kelly (Hailey, Tyler, Evan and Luke), Alida and Ian Bos (Alliya, Cierra, Adrianna), Rosalie and Mike Linde (Allison and Kylie, Mellissa and Raff Barros (Elijah, Levi, Maya and Audrey), Matthew and Chelsey Kelly (Edward, Maverick and Casey) and Andrew (Rachel Grant) Kelly; Henry and Roeli Kelly and their children: Harold and Rhonda Kelly (Olivia, Paige and Parker), Jacob Kelly, Rebecca and John Vanhengstum (Vera and Mabel), Henry and Diana Kelly (Dean , Gabriel, Sybil and Winston), John Kelly, Aileen Kelly, Rosalynn and Dan Witten (Sawyer, Hayden and Neve), Ruth and Alan VanAndel (Alec and Nora) and Esther and Graham Bartels (Neil); Harold and Riemke Kelly and their children: Harold and Chantel Kelly (Shayna, Darryl, Emily, Brantley and Wyllem), David and Brenda Kelly (Tsjibbe), Hendrik and Caryn Kelly (Hendrik, Erica, Dylan, Jesse and Carrie), Anneke and Josh Brouwer (Charles), Laura and Dereck Nieuwold (Darren) and Michele and Allan Draaistra (Adallynn, Peyton); John and Sietske Kelly and their children: Harm and Petrina Kelly (John, Elsa, Garrick, Harm, Saskia, Michael and Kenneth), Tsjibbe and Amanda Kelly (Amber, Natalie and Nathan), Edward and Christina Kelly (Megan, Rosie, Brielle and Allison), Amy and Justin Overbeeke (Kelly and Hunter), Hendrik and April Kelly (Kinsley) and Michael Kelly; Janet and Glenn Oosterhof and their children: Alissa and Mike Pols (Chase), Miranda and Calvin Vonk (Kolton), Glenn, Cassandra and †David. Harm was the brother of-†Jan and †Ali (DeGroot) Kelly, †Hendrik and †Anne (Vos) Kelly, †Margaretha and †Jan Koster, †Lambertus and †Hennie (Koster), Femmy and †Albert Linde, Lammy and †Simon Benjamins, Hennie and Pete Vanderdeen, Alberdina and Bert Te Winkel, †Jan Kelly jr. and †Margaretha jr as well as brother-in-law of Ali’s siblings †Joe and Elly Zantingh, †John and Alida Zantingh, Bert and Fenna Zantingh, †Aleda and Mel Rozema, (†Gys VanSoelen), †Rick and Willy Zantingh, Sienie and Albert Katerberg, Jane and Martin Vanderveen, Henry and Brenda Zantingh, Jerry and Helen Zantingh and Rhea and Ed DeVries. Uncle Harm will also be missed by many nephews and nieces. His life was devoted to serving his Lord and Saviour and to his family. Funeral arrangements entrusted to BALLARD MINOR FUNERAL HOME, Dunnville (905-774-7277). Due to the COVID-19 pandemic, we are unable to hold a public visitation or service, but please know that the thoughts and prayers of our friends mean the world to us. A private graveside service will be held at Maple Lawn Cemetery, Wainfleet on Saturday. A closed service will be livestreamed on the Bethel Christian Reformed Church website (www.dunnvillecrc.ca) on Tuesday, April 7, 2020 beginning at 11 am. The full funeral service will be available to view at the Bethel CRC website and the Ballard Minor website after the service has concluded. Donations to World Renew or Back to God Ministries would be appreciated by the family. Friends are invited to send condolences and sign the Book of Memories at www.ballardminorfh.ca.
For I am convinced that neither death nor life, neither angels or demons, neither the present nor the future, nor any powers, neither height nor depth, nor anything else in all creation, will be able to separate us from the love of God that is in Christ Jesus our Lord. Romans 8:38,39
Read Less

To plant a memorial tree in honor of Harm Kelly, please visit our Heartfelt Sympathies Store.

Receive notifications about information and event scheduling for Harm

Donations are being accepted for:
World Renew BACK TO GOD MINISTRIES INTERNATIONAL

We encourage you to share your most beloved memories of Harm here, so that the family and other loved ones can always see it. You can upload cherished photographs, or share your favorite stories, and can even comment on those shared by others.

Posted Apr 10, 2020 at 10:22am
Jim and I were very sad to hear of Harm’s passing. He will be missed by his loving family. He was a constant in our life, always friendly and talkative. God Bless.
Comment Share
Share via:
K

Posted Apr 09, 2020 at 01:37pm
Ken & Liz Jager & family: Dear Kelly family and extended family: Our sincere condolences with the passing of your father, grand father, great grand father. May the Lord surround you all with the rich promises of the gospel and grant comfort and peace throughout your time of mourning. May we all long for the day when sorrow and sighing flee away and may our LORD return with haste.
Comment Share
Share via:
K

Posted Apr 06, 2020 at 07:11pm
I have some fond memories of Uncle Harm. He was my catechism teacher and taught me the TULIPs of Calvinism. We had a great many discussions after class. He was very receptive to all my questioning. I appreciated that very much. I also appreciate that whenever I returned to visit Bethel Church or preach, he was always warm, friendly and encouraging. I will miss seeing him sitting next to my mom on our future visit. My sympathy to all my cousins and their families for the loss of one so loved.
Comment Share
Share via:
K

Posted Apr 06, 2020 at 07:06pm
My deepest sympathy with the passing of your dad and Opa.
He waited patiently for God to take him home. It will leave a very empty place in your lives. He was my brother-in-law and friend. An interesting man to be with. I will miss him. May you be strengthened by God's presence in the coming days.
Love from Aunt (Tante) Willy
Comment Share
Share via: 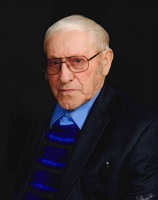 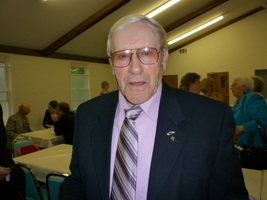 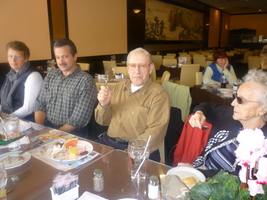 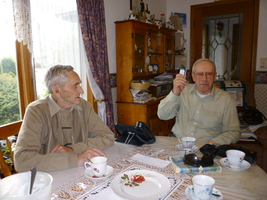